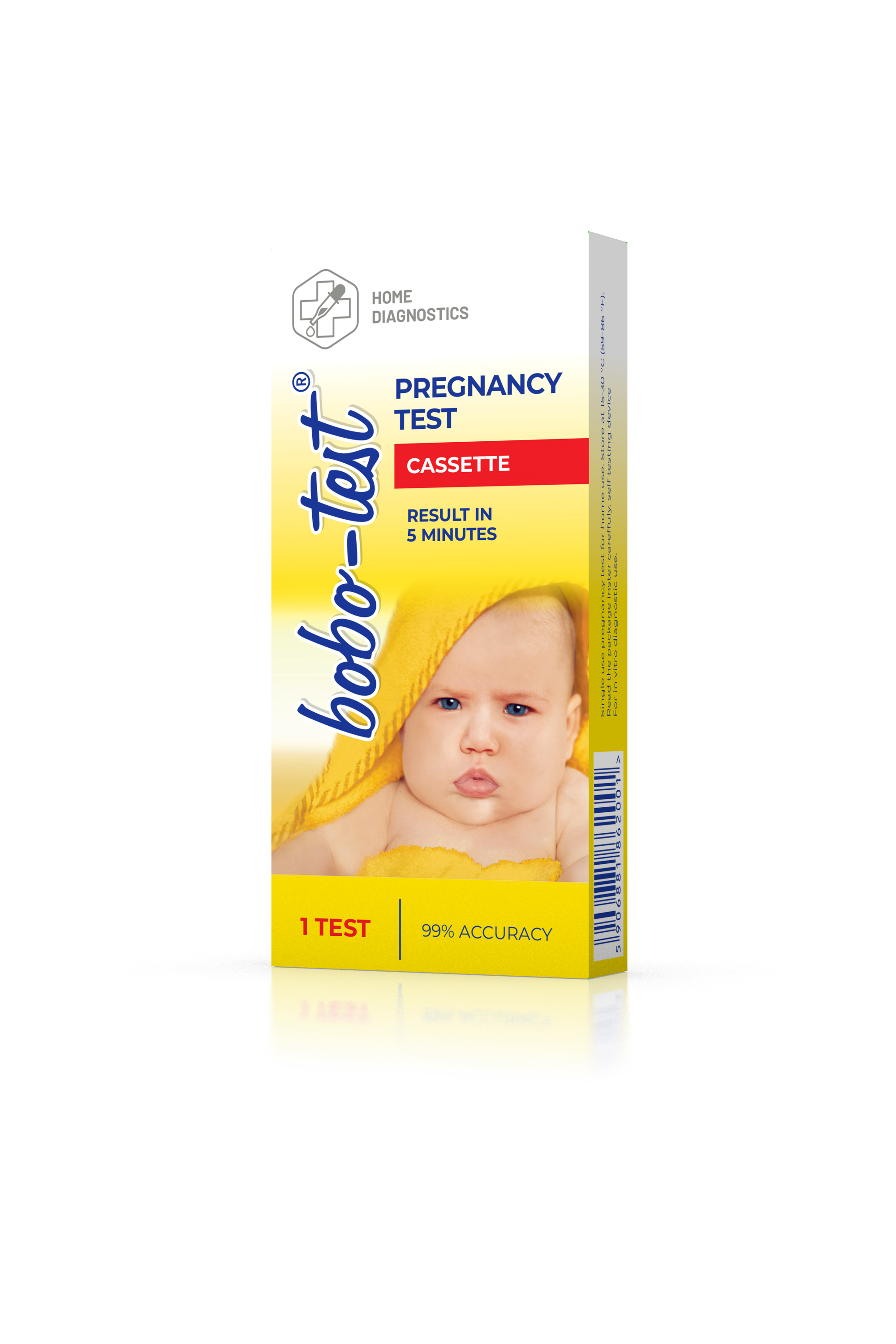 Bobo-test rapid midstream test (10 mlU/ml) for early detection of hCG in human urine, detecting pregnancy 50% earlier than similar tests. The studies have shown this test can detect as low as 10mlU/ml of HCG. It is designed to detect the pregnancy hormone as early as 2-3 days from the rise of HCG levels. The simple, convenient, easy to use product yields results in as little as one minute.

How does the test work?
The Test is designed to detect a very small amount of the pregnancy hormone hCG (human Chorionic Gonadotropin) in your urine. The cut-off of this test is 25 mIU/ml with an accuracy of >99% in laboratory studies. This hormone is produced soon after conception, and progressively increases during the first three months of pregnancy. The test is ultra-sensitive; studies have shown this test can detect as low as 10 mIU/ml of hCG. It is designed to detect the pregnancy hormone (hCG) as early as 2-3 days from the rise of hCG levels.

Does breast feeding or drinking alcohol affect the test? No.

What do I do if I get a positive result?
If the test result is positive, you should consult a doctor to discuss your pregnancy and what steps and precautions you should take next. In addition, you may want to confirm your test by re-testing with another test three days later. Remember, early pregnancy care is very important to ensure a healthy baby and mother.

What do I do if I get a negative result?
A negative result means that no hCG hormone has been detected and you are probably not pregnant. If your
period does not start within a week, you may have miscalculated the day your period was due. Repeat the test using another test. If the second test still gives you a negative result and you still have not menstruated, you should see your doctor.

What factors can affect the result?
If you follow the instructions carefully, you should not get a false result. However, certain drugs and rare medical
conditions may give a false result. Injected medicines containing the pregnancy hormone hCG may cause a false result.

What if I am unsure about the intensity of the color band in the test result?
If the test is positive, the Result Window will show TWO pink-purple colored bands at five minutes after the absorbent strip is exposed to the urine. The result is positive regardless of how faint or strong the colored bands are. However, if you are unsure of the result, you can confirm the result by repeating the test after 3-4 days when rising hCG levels will produce a darker band and confirmation of pregnancy. If the repeat test fails to produce a darker test band, then please call our help-line for further interpretation of the result.

Can the result change after a certain length of time?
A positive (pregnant) result will not change several days after the test is completed. However, some reddish
background might be noticeable several hours after the test has been performed.
A negative (not pregnant) result should not be read in the Result Window after the five minute test waiting period. After 30 minutes some negative results might appear to be weakly positive. This happens because the test chemicals continue to react even after the five minute waiting time.